Confirmation of Ectopic Transmission at a Neuronal Synapse

In 2005 we developed a model of neurotransmission at the chick ciliary ganglion in a 3-D model reconstructed from high-resolution serial electron-microscopic tomography (Coggan, Bartol et al. 2005). Based on the distribution of amplitudes of the simulated synaptic activity we predicted that the miniature excitatory postsynaptic currents were primarily ectopic; that is, we predicted that synaptic transmission occurs outside the active zone that is defined by concentration of vesicles on the presynaptic side and the dense postsynaptic density. In response to our model, Peter Sargent at UCSF tested our prediction by selectively blocking the alpha-3 and alpha-7 nicotinic acetylcholine receptors. He confirmed our prediction (Sargent 2009) and we are collaborating with him to follow-up on this surprising result. Extrasynaptic receptors are also found on neurons in the central nervous system, which raises the possibility that neurons may communicate through sites outside the classically defined synaptic release zones, as we have found in the ciliary ganglion.

We reconstructed a 6x6x5 μm3 piece of the rat CA1 hippocampal neuropil containing 465 synapses and parts of 450 axons, 150 dendrites and a single astrocyte (Fig. 1), and used MCell to study the dynamics of transmitter release at presynaptic terminals (Modchang, Nadkarni et al. 2010; Nadkarni, Bartol et al. 2010), the diffusion and spillover of glutamate in extracellular space (ECS) (Kinney Submittted) and the dynamics of calcium in postsynaptic spines (Keller, Franks et al. 2008). An HD video of the reconstruction can be viewed online at: http://www.youtube.com/watch?v=FZT6c0V8fW4. 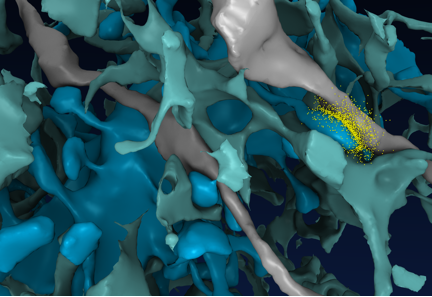 Fig 1. Frame from an MCell movie shortly after release of glutamate (yellow) from an axon (gray) opposed to a dendritic spine (blue) in reconstructed CA1 neuropil in which only a few of the axons and dendrites are shown (Scientific American, March 2011).

We used MCell to model the entry and diffusion of calcium in the presynaptic terminal and calcium binding to calcium sensors on synaptogamin. We identified three time scales for synchronous and asynchronous vesicle release that were insensitive to the spatial details of the synaptic ultrastructure and accounted for a wide range of experimental results. The model predicted that approximately 64 High-Voltage Calcium Channels were needed in the terminal at an average distance of 300 μm from the calcium sensors to account the range of release probabilities and paired-pulse facilitation (Modchang, Nadkarni et al. 2010; Nadkarni, Bartol et al. 2010).

The 3D geometry of the extracellular space is visualized in Fig. 2 as a solid. In contrast to the accepted value of 20 nm for the extracellular spacing, the reconstruction revealed an interconnected network of large diameter (60 nm) tunnels, formed at the junction of three or more cellular processes, spanned by sheets between pairs of cell surfaces with nearly uniform width (Kinney Submittted).

We used MCell to simulate the entry of calcium through NMDA receptors in the postsynaptic spine and showed that at normal calcium pump densities, the calcium dynamics in spines is almost independent of the spine neck length. This implies that spines can change the length of their neck to make synaptic connections with nearby axons without affecting the critical timing of the calcium signals that control synaptic plasticity (Keller, Franks et al. 2008). 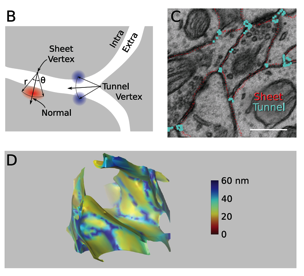 Fig 2. The geometry of extracellular space (ECS) has thin sheet-like surfaces between networks of wide tunnels. (B) ECS vertices were classified as sheet-like or tunnel-like according to the number of neighboring objects. (C) Cross-section through the raw reconstruction showing approximate location of vertices identified as being tunnel-like (blue) and sheet-like (red). Scale bar: 500 nm. (D) One cubic micron showing the ECS as a solid with the intracellular space invisible. ECS width is color coded. (Kinney Submittted)